A Word with James Donald 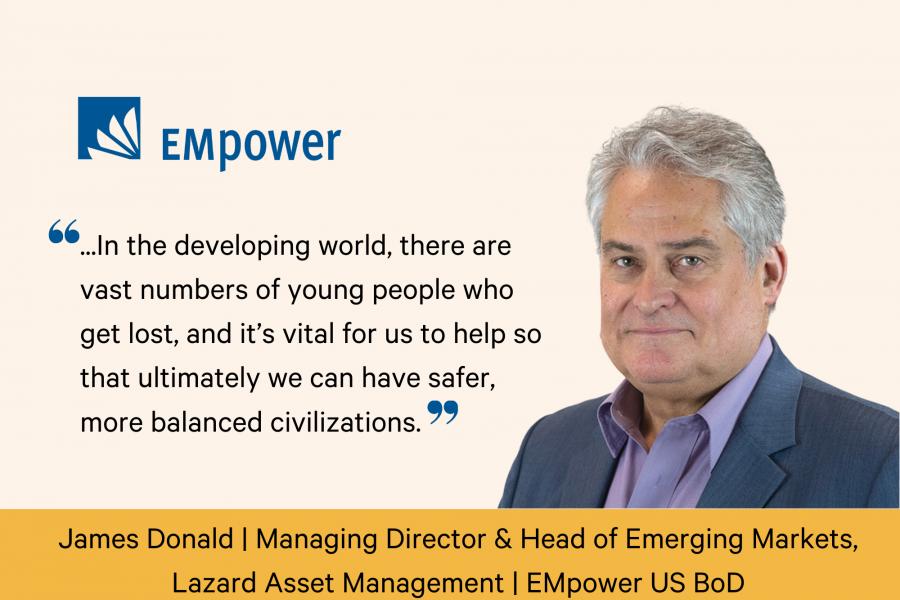 Recently EMpower’s President & CEO Cynthia Steele spoke with James Donald, Managing Director and Head of Emerging Markets at Lazard Asset Management, and a member of EMpower’s US Board. They spoke about his long-term involvement with EMpower, the challenges young people face in emerging markets, the new world of work, and more.

You have been a longtime member of the EMpower board and I'm interested in your perspective, how have you seen EMpower evolve and what is it that strikes you about our evolution?

There have been a lot of people in our industry from all sorts of areas who have been associated with EMpower. The board has changed quite a bit in the 10 to 15 years that I've been involved. When I was first getting to know EMpower, the board was made up of those focused on fixed-income and hedge funds. I'm glad to say the board has continued to have those elements, but it's also become more equity-focused. Hopefully, in time, maybe it will consist of those that are more private equity and private debt-focused. There's certainly been a broadening of the organisation and of the board. And it is also very encouraging to have seen EMpower grow in terms of the funds that it’s been able to raise, and the increase in the number of grantees across a greater part of the developing world. Obviously, the staff has increased substantially as well. When I first got involved, the organisation was based mainly in New York, but now we have offices in London, Hong Kong, and India; it really is a global institution, and that is totally appropriate given its involvement in emerging markets.

What is it about our mission and the work that we do to empower young people in EM countries that you find most compelling?

Adolescents in the developing world are often not receiving as much attention or focus from many of the bigger organisations. At the end of the day, they are the people who are about to get into the workforce, about to raise children. And it's important that they are able to do so in a more balanced and healthy way. EMpower's focus on young women is vital because women in the developing world have a particularly difficult experience and often have little or no control over their lives. But if you can give women the opportunity for basic education and enable them to have a career or give them options, that can be lifechanging. But at the same time, it's vitally important that young men have healthy upbringings as well, through sports and through safe places to be. Sometimes we don't really think about this enough—and perhaps we don't have such pressures on us. But in the developing world, there are vast numbers of young people who get lost, and it’s vital for us to help so that ultimately we can have safer, more balanced civilizations. It's very important for us investment professionals in the business, who have often benefited from these countries.

Stepping outside of EMpower for a minute and thinking about the past few years, I'm curious to see from your perch, what do you think will be potentially permanent changes in the world of work post-COVID? Compared to a few years back, what's different?

There will be a lot more electronic meetings—and I'm not saying that's altogether a good thing when making investment decisions. But now that we have gone through a significant period of time locked down, we know it can be done and it is still a reasonable option. My sense is that, particularly in our world where face-to-face decision making is really important, it is still useful to have hybrid meetings. A lot of companies don't need to have people together in a room. And it makes sense for a lot of people to work from home most of the time, or to be mobile if they're in sales. They can always contact people and have meetings when needed. To some degree, there will be less need for real estate by a lot of companies, but I still think in face-to-face situations, it's going to be important to have people together and in the same physical space.

I agree. We're all trying to figure out how to build a culture and attract and retain talent in this brave new world. It really is different. Is there anything that you wanted to add?

The only thing I think is worth saying is that EMpower is very lucky to have people internationally. For instance, we're very lucky to have someone like Jeremy Llewellyn [Chair of EMpower’s Joint Executive Committee], who is an expert in a lot of what he does. He's decided to put in a huge amount of time into the organisation. There are other people who were doing that, and you yourself are doing that. EMpower has been very, very fortunate in that so far, and I hope that it will continue to be.

Thank you! That is so appreciated.