A Word with Nick Koh 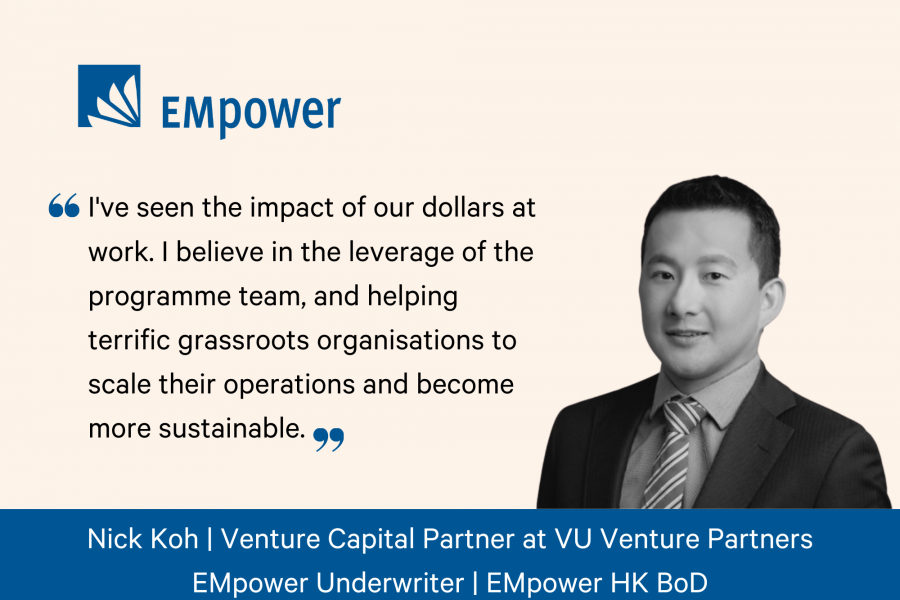 Recently EMpower’s President & CEO Cynthia Steele spoke with Nick Koh, Venture Capital Partner at VU Venture Partners, an underwriter at EMpower, and a member of our Hong Kong Board of Directors. They talked about what drew him to EMpower, the power of photography, and more.

You have such an interesting origin story with EMpower. Could you talk about how you first got involved and your early photography work with some of our grantee partners?

My wife and I have loved travelling extensively and worked in Asia, for pleasure and our roles as equity portfolio managers. Traveling around, you can see the tremendous need in the region, and the desire to give back has been very much ingrained in both of us from a young age. My mother was a social worker in Singapore where she helped the underprivileged, including refugees. Jess's family were all refugees who fled Vietnam after the war. Like many others, they arrived in Australia with nothing. Their stories are very much a constant reminder that given opportunities and a helping hand, you can have an enormous impact on people's lives.

In terms of why and how and when: Jess and I have been donors to EMpower since 2012 when we were introduced to the organisation by Ben Hall, the former chair of EMpower Asia. Ben is a very dear friend of mine from our university days in Sydney. It was at those annual dinners where we first learnt about EMpower's model and the impact the organisation has had in the region.

Photography has very much been a passion of mine, and a part-time hobby from when I travelled at a young age. In 2015, I was lucky enough to have a three-month leave between jobs. I participated in a storytelling photography workshop with William Albert Allard, who is a 50-year National Geographic veteran photographer. My assignment there was to help refugee NGOs based in Bangkok tell their stories. Subsequently, the workshop instructors really encouraged me to help charities to communicate their stories. Often, they don't have the communications budgets or the photography skills to tell their story. That was a great introduction to NGO photography and soon after, in 2015, I had the opportunity to visit EMpower’s grantee partners in the Philippines and use some of my newly gained photography skills.

I very fondly recall visits to ZOTO in Manila and to Roots of Health in Palawan. I was able to hear those individual stories, but also to see EMpower's model and the impact it was having helping grassroots charities. I recall visiting the slums in Tondo—which they call Riverside Condominiums—and some of those seaside towns which were quite recently wiped out by Typhoon Haiyan.

In 2016, I had the opportunity to visit Jimmy Pham at KOTO in Vietnam during a family trip to Ho Chi Minh City—seeing how Jimmy dedicated his life to helping street kids and marginalised youth.

Over time, I've found it both a challenge and a privilege to communicate not only these stories of tremendous need, but also the immense optimism of youth and positive change on the ground. There's so much complexity. As they say, a picture can tell 1,000 words, which I've really found to be so true. And I have been privileged to have some of my pictures help tell the story of our grantees and EMpower’s work.

In 2019, Jess and I stepped up to be underwriters because we both believe in EMpower. I've seen the impact of our dollars at work. I believe in the leverage of the programme team, and helping terrific grassroots organisations to scale their operations and become more sustainable. In 2019, I also stepped up to become a member of the Asia board. It's been a great learning experience for me to give back and to be involved in the direction of the organisation, most recently through the strategic review.

From your point of view, I’d love to hear about the things that you wish people understood about where Hong Kong is right now and things that we might not understand about it.

I've lived in Hong Kong for the last 16 and a half years. Over that period, there's no doubt that some things have changed, but some things remain the same. It's still a beautiful global city to live in, surrounded by brilliant mountains to hike, a wonderful coastline to swim and paddle around. Most tourists are stuck in the bars and restaurants and don't get to see this, but it really is a hidden gem.

Over time, Hong Kong has become more of a Chinese city. Chinese have deservedly risen through the corporate ranks. This has been accelerated in the last few years by the COVID restrictions and with some expatriates and some businesses leaving too. Borders were all but shut and conducting global and regional businesses from Hong Kong was quite problematic, as you can imagine. However, I'm optimistic that the worst is over. We've seen almost every pandemic restriction has eased in past few months, and quarantine appears to be a thing of the past. There's a strong sense that Hong Kong needs to regain its place in the region and in the world. I wasn't living in Hong Kong during SARS in 2003, but it's always been able to bounce back and shouldn't be underestimated or written off.

You already spoke about this, but I want to give you the opportunity to add anything else in regards to your role as a supporter, then as an Underwriter, and now as a Board Director. You, as well as Jess in her own right, have been fierce champions for EMpower. What it is that inspires you about the work that EMpower does?

I'd probably summarise in two words: the mission and the people.

The mission of helping local grassroots organisations who are best positioned to know the immense need on the ground and the nuances in their local communities. I have loved witnessing first-hand the power of EMpower’s model and network—bringing resources, long- term partnership, capability, governance, and funding to these local communities, to get them to be even better at what they do.

Bringing best practices from around the country, but also around the world, and opportunities to learn and collaborate. It's really that multiplicative impact of our donor dollars—where you see the ROI from a financial fund manager’s perspective. This is a really unique selling point and makes us passionate about the impact that EMpower is creating.

Secondly, the people: EMpower has had a great staff team with deep expertise which is only going from strength to strength since Jess and I have been involved. For example, Gritt Richter in SE Asia and Nisha Dhawan in India bring exceptional capabilities.

Also, we are surrounded by very passionate, dedicated directors. Ben Hall has been a constant source of inspiration; the energy and dedication from Maddy Foo, who started EMpower's presence in Asia; the unceasing energy and passion from our Asia chair, Aleem Jivraj; Aasha Pai and Rachel Andrews' deep insights into philanthropy in the region; also Ben Falloon; EG Morse; Ross Hamou Jennings; Richard Johnston; Stephen Chang; Vivien Teu; and Avon Neo. They're driving us all to do more for the worthy cause of helping underprivileged, marginalised youth in the region. It’s been terrific to be involved with such generous and great people!

I feel the same about the people that are engaged with EMpower: the amazing directors and the team that we have! Thank you.