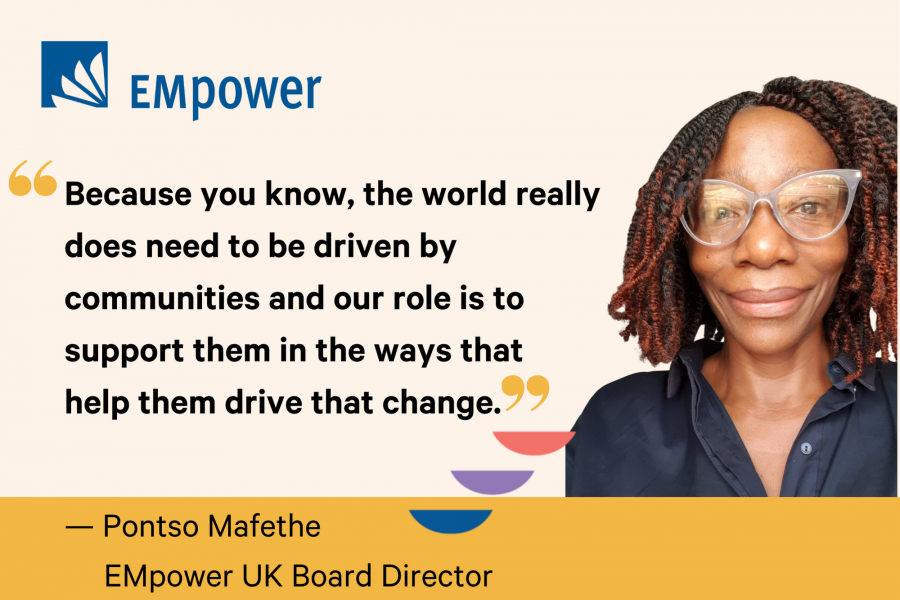 Recently Cynthia Steele, EMpower’s President and CEO, spoke with Pontso Mafethe, who has over 25 years of experience working in social justice, particularly women’s and girls’ rights in Africa, and is currently the Director of Programmes at the African Women’s Development Fund and Chair of EMpower UK’s Programme Committee.

You have such a storied career and so much experience with grantmaking that relates to women and girls. I’m really interested to know what are the kinds of shifts in this space that you’re excited about?

Just from a personal perspective, growing up in southern Africa, my grandmother, my mother, my aunties, my cousins, all of them were very much engaged in what was happening in the community. But somehow when I first started out, when these development projects were coming to me, they were all like, “This is what we are going to do, and if you don’t fit into this, then it’s not going to work for you.” So joining the sector in the U.K., I found it weird that the organisations were not of the communities. That for them, it wasn’t about systemic change.

An interesting observation from my own experience and thinking about the types of organisations that I had seen—who were doing really good work with women and girls—is it’s all very well giving them an income-generating grant, but if they then have no decision-making authority about how that money is spent at the household level, there are questions about what you really are changing. So we should start the conversation around understanding more of the root causes and not just focusing on the symptoms.

Over time, we actually shifted the paradigm from one that was “if you are working with women, you are eligible” to “if the work is being done by and led by local women, then that is the way to go.” When we look at the sector now, we’re thinking more about involving the communities in decisions about who gets money and what success actually looks like. Recognition has shifted to the work local women- and girl-led organisations have been doing. It’s a point on a journey that has further to go but there has been so much movement in that regard, and I always like to think I played a little part in different ways but certainly in my grantmaking career.

Where do feel like the needle still needs to move forward and further? What is still ahead in terms of shifting the paradigm?

I would say there is a lot more work to be done on ensuring that the funding really reaches the organisations who are on the frontlines of communities.

Someone used the phrase the other day which made me laugh. They will do the “funding pretzel” to make their work fit what the respective funders they want to apply for want to see. What moving the needle means for me is being really honest about the power that we have as grantmakers and understanding how race plays out and how decisions are made in philanthropy. It also plays out in terms of relationships between who are majority white funders in the global north and in many respects the black indigenous people in the global south.

If we really want to see change, we can’t be defining what success looks like, who gets money, and what the issues are if we are not of those communities. I think also being absolutely purposeful about involving them in making those decisions and pushing us as grantmakers to make sure that we do that in meaningful ways.

But if we’re serious about change and really bringing about social justice then that’s the place we are going to have to go to and feel comfortable about being. Because you know, the world really does need to be driven by communities and our role is to support them in the ways that help them drive that change.

You have been such an important member of the EMpower board for many years now. What are the changes you have been glad to see over your tenure?

I would certainly say over the years the organisation feels more rooted in the communities that it is working in. So I would definitely say for me that has been one of the big changes. I think the second one has been that the programmes we’re presenting speak much more to justice than development.

So it’s not just about getting lots of kids in school, for example, it’s about ensuring that children have what they need in every sense: to be able to get an education that will help them, set them up for a better, more engaged, more fulfilled life.

I think for me it feels like it’s much more focused and strategic. There are a lot of countries out there where EMpower could work but I think it is important that there is clarity about why the choices that have been made have been made. And we’re really, really robust. When I say that I think in terms of our relationships with the organisations that we partner with. It’s not “here’s a grant and issue a report,” it’s about walking alongside and accompanying organisations on a journey over up to 10 years. That is so key. It’s such a distinguishing feature of the nature of EMpower’s relationships with organisations.

Now EMpower is probably one of the leading philanthropic organisations in the space around the role of adolescent girls, not just in working with communities but also in leading on, learning, and sharing their experience more widely. Let me not forget that one.

So on the note of what else or what more to come. What would you like to see EMpower be doing?

It flows from what I just shared about the leadership of the adolescent girls here. I’m really looking forward to that being extended and building on the incredibly rich experience we have across all of the regions—building a movement that is driven by girls. I think about what do those young people that we work with have to bring to our processes that can both give them experience and enrich what we do.

I think generally we tend not to take moments to celebrate or make knowledge of the incredible work that happens because we’re always thinking about those big social justice issues out there. There is real importance in sometimes looking back and seeing how far we have come. It has been an incredible journey to date. Going forward it’s going to be even more so.

I am interested to know where do you see the greatest potential for anti-racism to be more actively and deeply practiced in philanthropy?

I would definitely say the first thing that philanthropy has to do is be absolutely explicit about naming race and racism. There’s no excuse. It will look very suspicious going forward if organisations aren’t being explicit about race.

We need to understand our portfolios, really understand how race is playing out in those projects. And then think about this going forward when looking at new partners and new types of work. We need to make sure we are addressing it in the decisions that we make around support. Just keep saying it, being purposeful about it. And not expecting that we’ll go from zero. I am certain that many of the organisations that we are supporting absolutely understand this, but I think we need to make them feel that they can speak about this. Because it’s so impactful to the communities they are working in, and the way different groups are affected. It’s not something that we will necessarily become experts in overnight, but I definitely know there are a number of philanthropic grantmaking organisations who are on this journey and who are on this journey to do it right, not to do it rushed. And I think that’s really important.