A Word with Robert Kushen 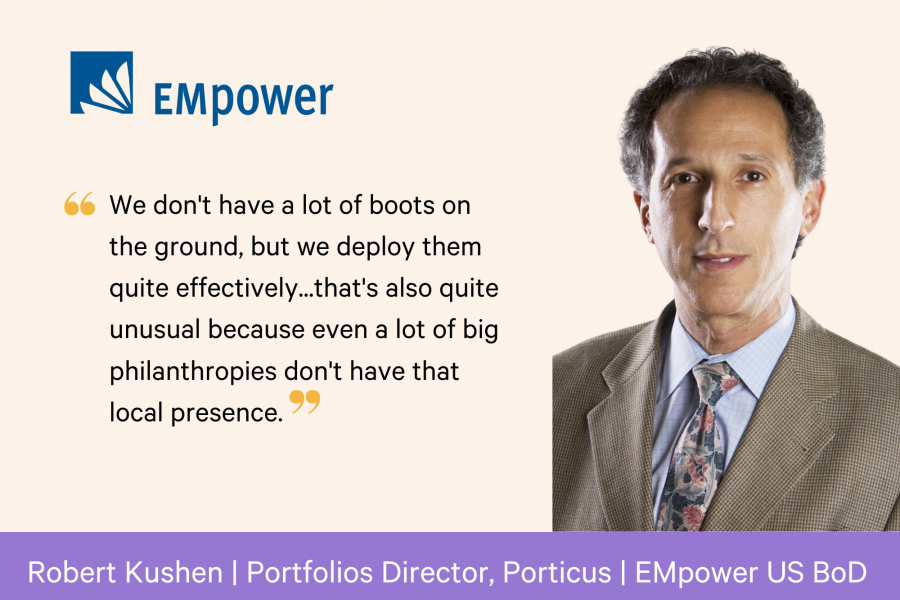 Rob, you have been on our board since EMpower’s founding. I'm interested in your perspective on our evolution and anything that surprised you, that you wouldn't have imagined back in 2000.

Yes, I was approached by the founder of EMpower when it was just an idea in his head, and I served on an advisory committee.

For me, one of the big surprises is the growth of EMpower both in a steady way, but also in a multipolar model where you have entities in different parts of the world. This reflects the fact that you have strong donors and supporters in multiple regional hubs around the world. I think this proved the power of the idea and the interest of the emerging markets community in supporting this idea. When it started, I thought: "Well, okay, this is nice. We have an idealistic small group of people from this world that are interested in trying this out." It was by no means clear that it would take off the way it has; I think it's very impressive that it has done so. Of course, there are some challenges in that multipolar model, which we're also trying to address now.

You're among the Directors with the most experience and expertise in philanthropy because of your day job. I'm interested to know what you think is unusual about our model.

Originally the unique value proposition for EMpower was its donor base. I still think that's an important feature of the organisation, and it's one that has evolved over time. It's great that we're diversifying our donor base beyond that, but I still think that's an unusual and positive element to EMpower. I think what's changed—I would say maybe this is also a surprise and also very exciting—is that EMpower has developed a sophisticated programmatic approach. In some ways, it is the vanguard of philanthropy, particularly the participatory approach. The work that we've been doing with girls and young women, and in general this kind of grassroots engagement, is now considered by philanthropy to be essential to doing the work well. I think EMpower has a lot that it can teach other funders in that regard. The other thing that's unusual is our ability to engage in multiple countries with a very lean staffing profile. We have still managed to maintain pretty close contact with the young people that we're serving. We don't have a lot of boots on the ground, but we deploy them quite effectively. I think that's also quite unusual because even a lot of big philanthropies don't have that local presence and probably would look to us in some cases for that. I think that's a good selling point to other donors.

Our organisational chart today compared to five years back shows that most of the growth has been in the countries where we make grants and other programme investments—India, South Africa, Hong Kong, and Mexico—which was very intentional. Where do you think we should be pushing the envelope more? Where should we be bolder?

While we are relatively focused in terms of the number of countries in which we engage, we're also engaging in some quite big, complex countries with big populations, big geographic spans, and big socioeconomic disparities. India is an obvious case. I think we've already started to deepen the connections among our grantee partners, and I would encourage doing more of that and maybe thinking about what it looks like to invest more resources, even within a given locality in one country, which I also know we're doing.

I think we can test that more and see what the benefits of that are for the place and the work that we're trying to accomplish. That would be great to see. The other area where we can be more thoughtful and encourage our partners to do more is governmental advocacy—seeing how we can take grassroots initiatives and help them scale up with the infusion of resources from the state that we couldn't possibly hope to match. I think that engaging more with the state as a potential funder of initiatives and/or creating the good policy framework for taking some of these initiatives further can help our partners achieve their goals.

One of the things that I enjoy watching and participating in is the interaction among directors, and with staff, who come from very different professional backgrounds. I'm interested to hear what is intellectually stimulating or rewarding for you by the interchange with peers from the finance sector.

It's a two-way street. I didn't have a background in the EM finance community so just being able to sit down with a group of people that I don't normally talk to is interesting in and of itself. We influence each other in ways that are productive for EMpower. They challenge me to think more in terms of return on investment and how can we apply performance metrics—both to the organisation and to our partners. And I sometimes serve as a reality check on their expectations; I might suggest ways in which return on investment should be reimagined more creatively and defined in ways that are appropriate for social change organisations. There are moments when I feel like I'm able to bring that reality to the board and be helpful to the organisation.

With the advent of your leadership—and also as you note, the growth of programmatic staff—we've got a lot of different ideas at the table now. There are ideas that aren't always familiar to this group of board members. My ability to act as a trustful bridge between the board and staff is helpful. I can say, look, this is good and this is real, and this is the way that good philanthropy should operate. It's obviously also a credit to your leadership that the board remains engaged. But I think I play a small part in that as well.

You play a huge part in that so I could not agree more.

It's an exciting time to be working with EMpower, and I am so happy to be a part of it.