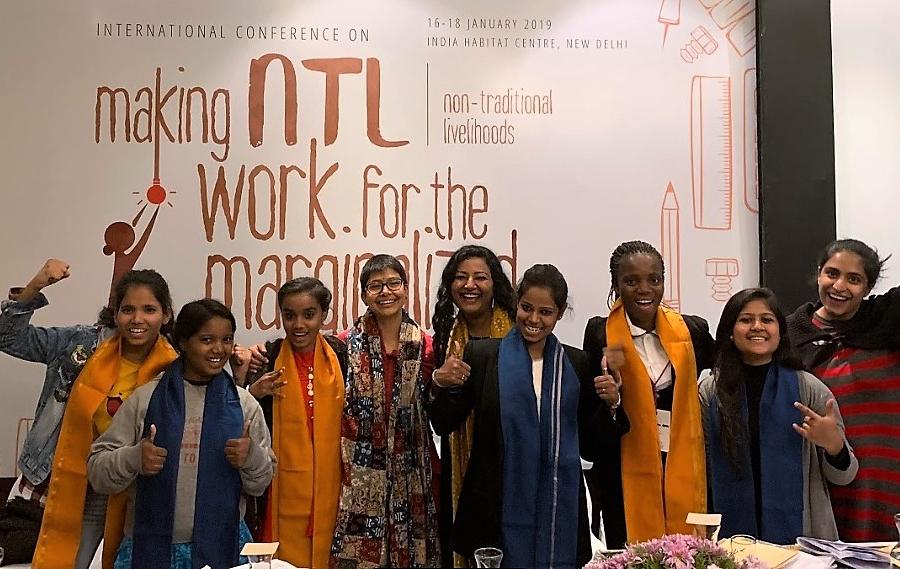 EMpower’s Girls Advisory Council underscored the need to expand livelihood options for women in India during a conference organized by Azad Foundation in New Delhi, India on January 17.

The international conference “International Conference on Making Non Traditional Livelihoods (NTL) work for the Marginalized” created a space for academicians, practitioners and industry experts to discuss ways to overcome existing gender disparities in the labour force.

It also brought into focus the existing, hardbound perceptions about the role of women in India.

For decades now, Indian women have been primarily viewed as wives and mothers, while their profession has been relegated to secondary status and often forgotten.

The data on Indian women’s participation in labour workforce can testify to that.

The female workforce participation ratio is among the lowest in the world: a 2018 baseline report of the SDG (Sustainable Development Goal) India Index states that only 21 women participate in the labor force for every 100 men.

To make matters worse, the numbers have been on the decline in the last two decades.

Their own organizations run programs with a keen focus on promoting and making non-traditional livelihood options more accessible for young girls. This movement does not only envision equitable access to jobs traditionally meant for men, but is ultimately about transforming the job market by including women. Non-traditional livelihoods typically include jobs sectors where women representation has historically been low; i.e. formal training and employment opportunities related to STEM streams, the automobile industry, construction, manufacturing, and more.

The Girls Advisory Council was initiated by EMpower last year, and the endeavour has been to put girls at the center of decision-making in issues related to their own lives

Speaking from their personal experience, the girl leaders shared insights into how programs can use girl-centered approaches to provide the critical exposure to non-traditional vocational routes, and to tertiary education, which in turn would equip young women with requisite skills to enter the job market.

Savita, a professional driver, spoke eloquently about the importance of having a well-paid, secure job. She said it was closely linked to stronger self-identity and felt that the job market needed to be re-drawn so that more women could access better opportunities.

At the conference, Mary recounted the challenges she faced to become a driver, many of which resonated with the other girls on the panel and the audience.

The girls opened the session with a Q&A round where Kajal played moderator. Some of the topics that were covered in the three-hour session included:

The audience played an active role in the discussion too.

The question of marriage—“What are your thoughts on marriage? Are you beginning to feel the pressure to get married?”—came up around then.

The line of questioning struck a chord among the girls on the panel. It is unsurprising because the pressure to get married and become a homemaker in India is one of the prime reasons for high attrition of women in the workforce.

The girls were candid in their reply. Rubi said, “I am already facing the pressure! I have negotiated my way out of it by interning with Feminist Approach to Technology (FAT). The internship happened because I needed a reason to keep the pressure at bay. Through a stipend, I enrolled in a 3-year undergraduate course and told my parents that marriage would have to wait. What they don’t know is that I am already planning to enroll on a post-graduate course as soon as I graduate, and that’s another two years I have bought myself!”

The other girls said that though marriage was not on the cards now, they would want a partner who would understand and support them in their careers.

What did we learn?

The girls took the session forward with key recommendations on involving girls in programmatic decision-making to create a more inclusive framework for higher impact. Some of the recommendations were:

- Exposure to livelihoods and education options at an early age, so that girls can choose their career based on what they are interested in as opposed to what they are expected to do

The girls concluded the session by circulating a commitment letter among the audience. The letter outlined 10 pledges to make NTL programs more robust and as each pledge was read out by the girls, members in the audience raised their hand to show support.

As the session came to an end, everyone in the room was inspired by the wit, confidence and understanding of NTL that the girls displayed. There was never a dull moment in the three-hour session which achieved the following objectives:

- Exposure to innovative ideas on being girl-centric through diverse interventions

Last year, at the GAC meet, among other recommendations, girls came up with ideas for organizations to strengthen their livelihood program designs. So it was only befitting for them to take charge at a conference of this scale and nature. We are thankful to Azad Foundation for this opportunity and so proud of our girls who always lead by example!