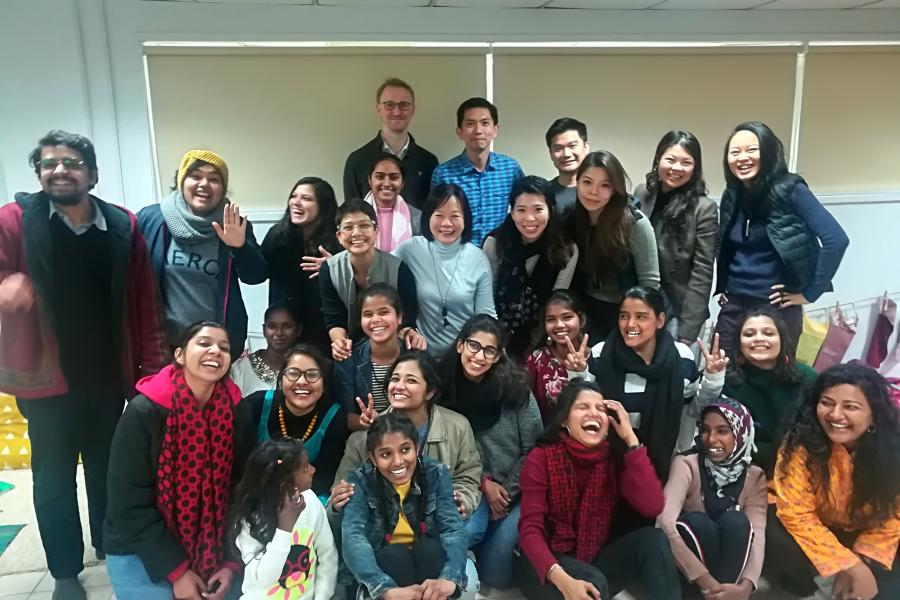 In January, a group of EMpower supporters, accompanied by Board Director, Maddy Foo, made a trip to India. The purpose of this visit was to provide a deeper understanding of EMpower’s work with young people in the region, specifically in Delhi.

The group met with three grantee partners: Azad Foundation, The YP Foundation and CREA over two days. Through these interactions, the Donors had an opportunity to talk with grantee partner teams at length, take a closer look at their programs, and meet young people who spoke to the impact of the programs through personal stories of change.

The trip allowed the EMpower team in India to foreground the impactful work being done by our partners in the region. It was also an opportunity to delve deeper into
EMpower’s gender lens focus in its work with young people in India.

The drivers highlighted some of the changes they experienced and witnessed after enrolling in the Women with Wheels program: renegotiating division of labor at home,
renewed confidence, assertion of identities as decision-makers in their own lives, and as important members of the community where relationships are based on mutual respect.

Alumni from Azad’s ‘Men for Gender Justice’ program spoke to its success, sharing stories of how they they now contribute to a safe and supportive environment for women,
which in turn has helped the women in their communities enhance their skills and pursue non-traditional livelihoods.

EMpower’s relationship with Azad Foundation started in 2013, enabling women to receive training to pass their driving exams and join Sakha as commercial drivers. As
passengers, the group also had an opportunity to spend time with Sakha drivers, who are graduates of the Azad’s Women With Wheels program. They shared that the girls were technically competent with perfect clutching and that spending time with these ladies trained by Azad Foundation was testimony to the success of the training.

In the meeting, TYPF’s team shared programmatic updates with the group on:

Girl leaders from the Adolescent Girls Learning Community* and alumni of TYPF’s programs shared instances of overcoming gender-based discrimination in their own lives. The group applauded them for speaking their truth and having the courage to share the stories in a public setting.

The group met the core team at Creating Resources for Empowerment in Action (CREA) to know and learn more about its work through partnerships with locally-led
organizations in rural parts of northern India. In its interaction with the group, CREA focused especially on the ‘Count Me In – It’s My Body (IMB)’ initiative,
that uses sports to mobilize girls and enables them to have a better understanding of sexuality, reproduction and health. EMpower has worked with
CREA since 2012 and helped strengthen and expand the IMB initiative.

CREA screened short films for the group where girls from the IMB initiative can be seen reimagining various facets of adulthood such as work, relationships, aspirations, success, romance and happiness. The group thoroughly enjoyed watching these films which were all embedded with popular culture references and used humor to drive home their message.

The group of supporters hosted a dinner for all our grantee partners in Delhi, which allowed for engaging conversations between everyone. Rubi and Savita, our girl leaders
from the Girls Advisory Council* attended the dinner. They briefly spoke about the milestones that they have accomplished as part of the Council and highlighted EMpower’s role in centering girls’ voices.

Sharing the comments of the group, Maddy Foo said, “They learned so much about the social challenges in India and are pleased to see the work EMpower does to improve the lives of adolescent girls in India. The meetings were informative, and we appreciate the interaction with participants of our grants. It is so encouraging when we hear from them directly, the changes in their lives and how they can also transform themselves from receiving assistance to transforming/helping others in their communities. Their poise and confidence shine through as they present their story to us.”

A big thank you to all the guests, grantee partner teams, and young people for an impactful visit!

*The Adolescent Girls Learning Community is an EMpower initiative in India that creates a platform to empower girl leadership. It enables girls to push for change in their own communities and address the barriers that prevent them from achieving their full potential.

* The Girls Advisory Council was borne out of EMpower’s commitment to amplifying girls’ voices and incorporating their advice in strengthening the design of our adolescent girl focused work.