Stories of Change: The Code to Success 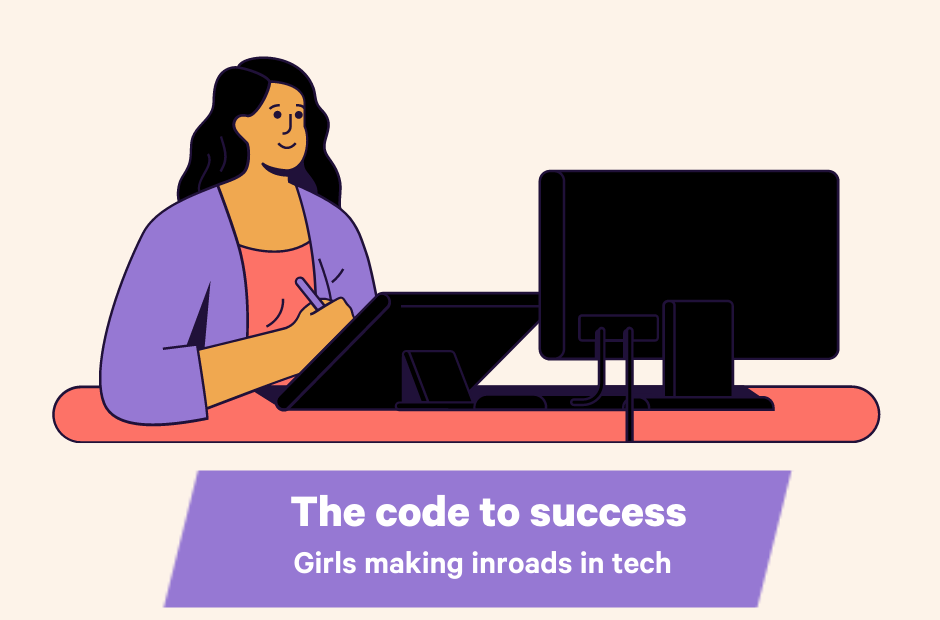 Trang tried to take a nap, to recharge her energy. But she couldn’t. She had taken many academic examinations over the past 12 years. However, she had never had as much anxiety as she was having this time around. This was the first employment test she had ever taken.

To prepare for the challenge, Trang spent a week reviewing the fundamental skills that she had been trained in over the last four months at REACH. An EMpower grantee partner, REACH provides vocational training, career advice, and job placement services to Vietnam’s most marginalised young people. Because the COVID-19 crisis has particularly affected fields where women are usually employed—such as hospitality services—it’s even more important that they have increased access to other fields like STEM.

“Our coding teacher and English teacher helped us to review and practice with logical math, CSS, database, and English,” Trang said. “We worked hard, but it didn’t make me any less nervous.”

It was half-past 12 o’clock. Trang and three of her classmates followed their teacher, Tung Nguyen, into a company spread over four floors of an office building in Ha Noi. Trang walked into the office and was amazed at the scene appearing before her eyes. The spacious and beautifully decorated office dispelled the summer heat and diminished Trang’s anxiety.

“I immediately loved that office,” Trang said. “It was the coolest place that I had ever been to.”

Trang was taken to a conference room of the company. There were about 25 other youth in the room, of which only six were women. They were final-year IT students from top schools in Ha Noi. They had come to test for four distinguished IT roles: dot net, java, tester, and automation. Trang, with 13 others, would run for a dot net coder position—a very challenging role.

After orientation, there was a 30-minute technical test. An officer came and distributed to applicants a paper exam. Trang felt anxiety combined with a bit of curiosity about what the questions would be. She could hear her heart beating in her chest and see the pen shaking in her hand.

“It took me nearly five minutes to start doing the test,” Trang remembered. The moment when she first saw the questions stretching over the whole paper she felt scared. “I was too nervous to focus,” she explained.

She ran her eyes over all of the questions and decided to start with the easiest one. Answering the first question helped her get more confidence to move on to another question and then another. Time flew quickly. It was up just before Trang was able to move onto the last question.

They moved on to the English assessment session. Another intense race with 30 minutes of time began. Now, Trang had even less confidence in her work. “The English part was tough for me,” Trang said. “I only started learning basic English when I came to REACH.”

Disappointed in her performance, Trang quietly dragged her feet out of the room to where her teacher Tung Nguyen was waiting. He had been as nervous as his students for the last hour and a half.

“I tried to hold back my tears when I was telling him that I had not done a great job,” Trang said. “And that I would definitely fail.”

Tung encouraged Trang to calm down and wait for the results. Every minute now went by so slowly and wearily. The recruiter came out with the results in her hand. The crowd of applicants stood around her eagerly. The lady said she would only call people who had passed their challenge. It was a shortlist with one person called after another.

Trang didn’t hear her name. She began to despair. Then, Trang found her friends staring at her. The lady was calling her name, a second time. “I couldn’t believe my ears. My name was there, at the bottom of the list!” Trang said. “It was unbelievable!”

Trang had passed the company’s recruitment challenge and received a position.

Two weeks after the recruitment test, Trang smiled when she remembered the moment her name was called that day. Trang’s journey to a fulfilling career has begun. “I am so happy,” she said. “I have achieved the first success for my dream to become a professional programmer.”