Stories of Change: Girls Leading the Way Out of COVID-19 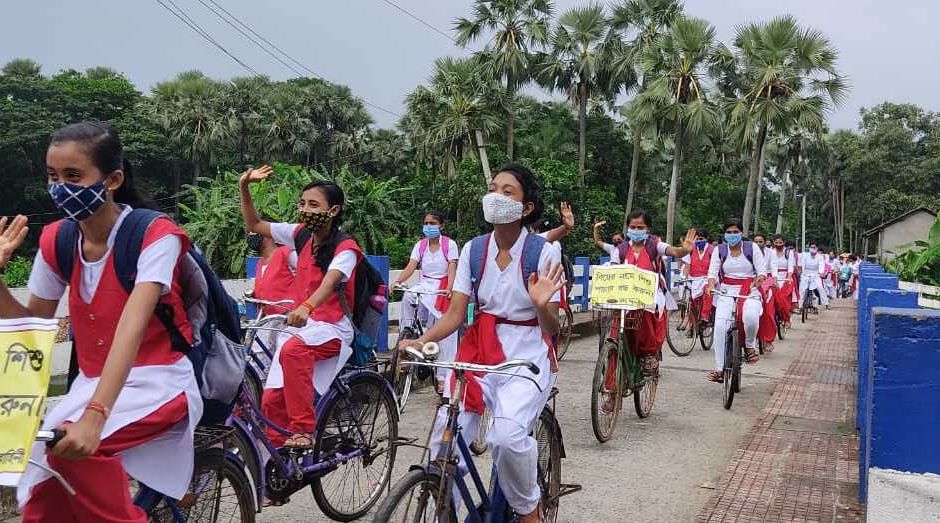 In May 2021, Cyclone Yaas brought widespread destruction to the coastal region of West Bengal, India—including flooding and agricultural devastation. Residents watched their food supplies, grain, bedding, kitchen utensils, and more wash away. Cattle and fish died. Many people, dependent on farming, fishing, and animal husbandry for a living, faced deep uncertainty about their future.

The storm also exacerbated the COVID-19 pandemic, which was already affecting hundreds each day. Hospitals were not spared; ICU units, beds, ventilators, and other life-sustaining equipment were made inaccessible or lost altogether. The cyclone intensified the public health crisis, leaving COVID patients without treatment, and many without even a proper burial.

Amidst the disaster, though, girls in the community took action to curb the damage and stop the spread of COVID. The girl leaders, who had been trained and mentored through the organisation Nishtha— a former EMpower grantee partner—some years ago, proved key to the local response. EMpower, who supported Nishtha from 2005 to 2015, enabled thousands of adolescent girls to be trained as community and peer educators on hygiene, nutrition, health, and gender equality. Today, these same girls are leading their communities to a more healthy and secure future and have inspired other girls to do the same.

In addition, they raised awareness of local health protocols and revived protection measures for women and girls, who were at increased risk of violence. They educated men in their communities about the harms of violence against women, and how they can best support women and girls and enable them to get an education. And they made sure to speak with young women and girls directly, to prevent them from falling prey to child marriage and trafficking.

The girl leaders provided more than first aid, they offered empathy and guidance. They sensitised people in their communities on the need for coming together. Nishtha reports that local residents, who were previously stricken with fear of COVID-19 and distrustful of their neighbours, became more compassionate and understanding. They stopped ostracising those they thought had COVID. Some young people from community clubs began working in tandem with the girls, helping to collect and distribute food to the most marginalised.

In response to the girls’ brave work, a collection of public servants, including a member of the Legislative Assembly of West Bengal, police officers, and other officials met with several of the girl leaders. They expressed their appreciation to the girls and recognised their immense dedication and selflessness.

For EMpower, it is inspiring to see these girls flourish and lead the way in their communities. According to Mina Das, Nishtha’s Director, “It is EMpower who has generated the strength and courage in these warriors so that they can emerge as dedicated and enthusiastic and uplift their community.”

We are heartened that the seeds planted years ago are firmly rooted, and the impact is quickly growing. One of the girl leaders who had participated in an EMpower-supported training several years ago said: “Nishtha taught me many things: speaking power, confidence, and courage. I cannot imagine my life without Nishtha…it taught me to care about myself and to care about other people.” In West Bengal, it’s clear girls are finding the power to transform their communities within themselves.

“During the pandemic, cases of domestic violence have increased. With this campaign, I want to empower the young women and girls of Peru to report violence and to be heard.” Milagros, 13

The Journey to become a BRAVE leader

Audery is a 21-year-old Senior Leader with BRAVE, one of EMpower’s grantee partners that works to inspire and empower young girls to become future leaders through travel, storytelling, writing and photography.

He became a millionaire, but never forgot where he came from.

Sanyto grew up in the Philippines in a poor community. His life changed when he found ZOTO.!