A Word with Eric Baurmeister 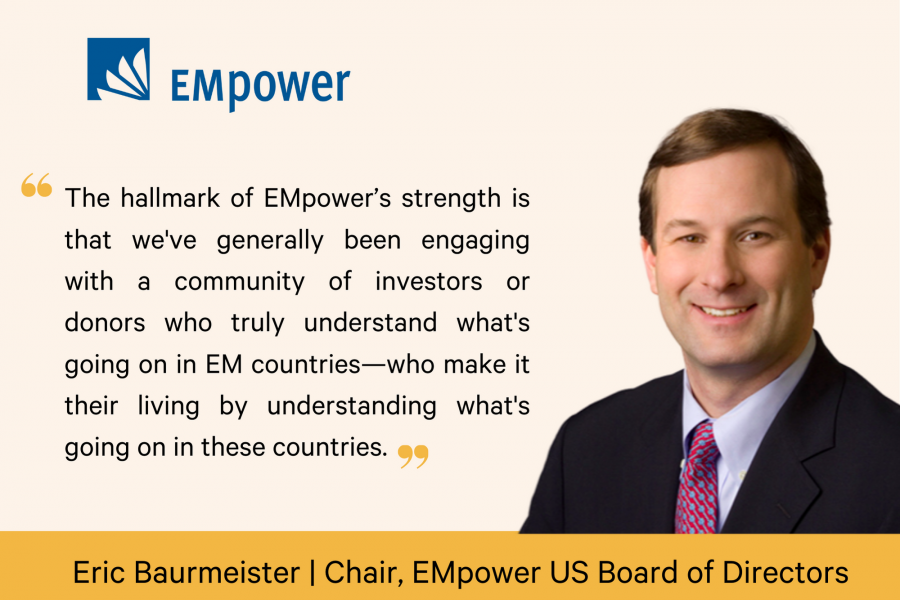 Recently Cynthia Steele, EMpower’s President and CEO, spoke with Eric Baurmeister, Managing Director at Morgan Stanley and Chair of our US Board of Directors. They had an interesting conversation about ESG (environmental, social, and governance) criteria—a set of standards for a company’s operations that socially conscious investors use to screen potential investments—and how the landscape has changed.

Eric, since you became a supporter at the very beginning of EMpower, there has been an arc, both for EMpower and the EM finance sector. I’m curious to hear how you think ESG and CSR have evolved?

When I started in emerging markets back in 1997, the idea of ESG as a concept was almost non-existent and certainly irrelevant to people’s desires to be in emerging markets. No one really looked at these countries using ESG criteria as we know them today. That being said, anybody who’s been a practitioner in emerging markets for a long time has looked at environmental, social, and governmental variables when they’re trying to think about the overall risk of lending to a country.

Governance (G) is hugely important. Governance relates to whether you’re implementing good policies that lead to better health and education outcomes, as well as economic outcomes, strengthened institutions, rule of law—all these things that fall underneath the ESG umbrella. They were all sort of old hat for most EM investors.

Clearly “social” (S) mattered in emerging markets, whether related to political stability, the incorporation of populace in political decisions, or whether it’s a place people wanted to live. You didn’t want to invest in a country experiencing human capital flight. You wanted a place where people can raise a family and provides opportunities. None of this is new to emerging markets. In fact, it’s a huge part of the whole development story that sells emerging markets to end investors.

Environmental (E) was a little trickier. I’m not going to say that years ago EM investors were overly concerned with environmental risks. We were more worried about: could a country produce oil, could they produce coal, could they produce metals and minerals? The countries needed to generate hard currency receipts to pay back their debt. Environmental (E) is becoming more and more important as a longer-term trend for EM investors. Clearly, our end clients want to see us think about those things. It’s still the trickiest one for us to figure out.

But we’re seeing the countries themselves, their populace, demanding that environmental standards improve. Nobody wants to live in a toxic waste dump. Nobody wants to live by or drink toxic or polluted waters. And you’re seeing that across a whole swath of countries. So, it’s become more and more important. It’s certainly become more and more important for end investors, the people who give us money to invest on their behalf as a dedicated manager—particularly in the pension fund community, and some of the sovereign wealth fund community to a certain degree. They want to see that you’re looking at those things.

And I would just say, for most EM investors, a lot of it we have already been looking at. I think the trick now, more importantly, is to show you’re looking at it. Record it, document it. Do it in a structured way that makes people feel comfortable, and they feel that you are really taking ESG factors into account. It’s going to be important for moral reasons, and hopefully, for economic reasons. If you create a policy environment—or just a business environment and a natural environment—that is conducive to people wanting to be there, to wanting to do business there, to wanting to raise families there, to educate themselves there, that’s all good for long-term outcomes in the countries. And broadly, for risk premiums over time.

That trajectory is so interesting. Given that ESG and CSR have increased prominence, what do you think are the implications for EMpower?

I think there are a few implications. One is that as people engage with these countries and think about the environmental, social, economic, and governmental challenges that sheds light on some of the problems that EMpower tries to address: the inequalities, the educational differentials, the lack of opportunities that are unfortunately rampant. As that gets more focus, you get more attention on those types of problems. Hopefully, you get more sympathy, you get more action to address those concerns, and you get more donations. You get more people interested in what EMpower has to offer, to try to rectify some of those problems. The hallmark of EMpower’s strength is that we’ve generally been engaging with a community of investors or donors who truly understand what’s going on in EM countries—who make it their living by understanding what’s going on in these countries. And that’s what’s attractive; we realise that this organisation is addressing the issues that we see in our business lives, that we know are prevalent, that we know are problematic. We see them with our own eyes, and we want to help see them addressed. So, the more people focus on these issues, the more people realise what’s going on, the more likely EMpower is to continue gaining support. At the same time, EMpower may be able to help our donor base think about these countries and the risks inherent in these countries and some of these challenges. And that may come into their business decision-making process. So, we could be a resource to help them make those decisions. There’s a two-part role.

You’ve been a supporter almost since day one, and US Board Chair for some years. Given your early beginnings with us, what surprises you about EMpower’s evolution over this time?

I would say, first and foremost, longevity. It was a great idea. A bunch of people got together, and they were like-minded; they said ‘let’s see if we can make a go of it.’ And here we are all these years later, and we’re doing it successfully. I think what began as an idea—where you’re cobbling it together, making it work, trying to figure it out—this turned into a much more professional, efficient, well-run organisation that delivers the services and the results that we want to see. And we measure those results, and we hold ourselves accountable. As any organisation grows and succeeds, success breeds more success. We find what works and focus on that. We see what doesn’t work—something may be a waste of effort or time—and we cut those things out. So, I really think the evolution of the organisation is such that we’ve kept to our initial goal of engaging people involved in EM markets, who make their living in these markets. We enable giving back to these countries and address the issues that we see. We stuck to that goal but became much better at it, much more efficient, broader in scope. And I would argue, we are a more professionally run organisation—as you would expect—going from that founding group to an organisation that’s built to last for many decades more.

Given the fact that you’ve been really involved, what kind of personal or professional meaning do you get from your long and deep involvement with EMpower?

It’s more personal than professional. I think you’ve heard me say it at many of our gatherings. This is an organisation that focuses on what we, as EM investment professionals, care about. It focuses on the countries in which we operate, in which we invest. It focuses on the people we see when we visit, when we learn about a country and do our due diligence. It focuses on the challenges that we know are there and see. And many of us that donate have been fortunate enough to be successful in this industry, have made a career in this industry. These are countries that clearly need help. One could argue that we’ve helped them through directing financing to them by investing in their debt for example. But while that’s our professional job, in our personal lives, these countries have given a lot to us too. We should be doing the same in our private lives, we should be giving back, and really supporting them to succeed at the grassroots level, as well as the macro policy level that we do on a professional side. So it brings them together. It makes me feel good that we’re addressing issues that we know need to be addressed.

Everybody has a lot of charities that they care about. And there are tons of good causes everywhere. They’re great causes in everybody’s local community that are very close to them. There are great causes far away. Personally, I feel that the pockets that we focus on are among the world’s poorest, the people who need the most help—the people who really are coming from very challenging environments and disadvantages. For me, I feel good about EMpower charitable dollars because I know they are going to people that may truly need the resources the most. Not that my local community doesn’t have great causes, and there aren’t people suffering, but the depth of the challenge may be greater in a lot of these EM countries. And if we can make an impact there, I feel like I get more bang for my charitable buck. People are excited about where we’re headed. We just have to keep it rolling now.