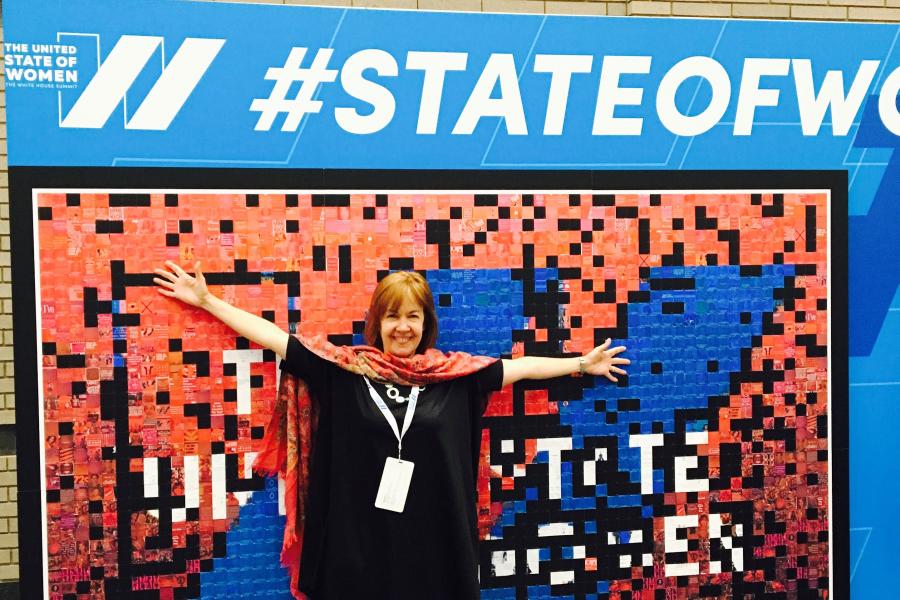 On June 14-15, over 5,000 changemakers — leaders, activists, business people and academics —gathered for the first-ever White House Summit on ‘The United State of Women’ in Washington, D.C. Cynthia Steele was among them:

“It was such a phenomenal gathering of luminaries speaking out about investing in girls and women: President Obama, Vice President Biden, First Lady Michelle Obama, Warren Buffett, Oprah, Nancy Pelosi (Minority Leader, US Congress), a host of nonprofit and business leaders and celebrity spokespersons for women’s and girls’ causes. One of the most powerful and moving events I have ever been to, as they were all passionate about one of EMpower’s most important priorities: furthering opportunities and ensuring the rights of girls and young women.”

At the Summit, Warren Buffet was interviewed by Dina Habib Powell, who heads the Impact Investing Business at Goldman Sachs and led its 10,000 Women initiative. Buffett spoke about his personal commitment to leveling the playing field for women, and what he had learned from his mother, sisters and wife. He spoke of his business approach to leveling the playing field as some of his best investments, including investments in women-led companies, and that three of the most recent directors of Berkshire Hathaway are women. “I am glad you are all working on addressing unfairness between women and men.”

We’re thrilled to see such luminaries come together to discuss an issue that EMpower has been at the forefront in supporting: the empowerment of adolescent girls. As President Obama said, “We are empowering the next generation by investing in adolescent girls… where everyone can live according to their dream… Where children’s aspirations aren’t segregated by pink and blue. Where girls know they can hold any job, and run any company, and compete on any field, and perform on any stage and science the heck out of any challenge. That’s the future we’re trying to build.”

President Obama’s remarks brought the audience to their feet, and to tears: See it here. Watch The United State of Women video here.

Today, we celebrate our progress, knowing that there is still more work to do.